The Woman In White

This is the story of two brothers trying to track their father, a weird man searching for unusual things, such as ghosts and monsters. The only clue they have to find him is an old journal of his in which he writes about a mysterious, sinister woman in an old house. As they are researching about this woman's case, they find out that she is dead since 1987 murdered by her husbund, who drowned her in their hometown's lake. They immediately looked at the calendar and they discovered that the night of the murder it was a fullmoon. They soon realised that that night was a fullmoon, too, so in search of their father they went there. What they saw that night was more than terrifying. They looked at the lake which was just in front of an abundoned, old house and saw a man drowning. They instantly tried to rescue him but it was too late. Some seconds after, they saw a white slender woman running and laughing. They realised that this was the woman from the journal and that she was taking revenge for her death. They tried to break into the old, haunted house. There, they found their father, trying to escape from the spooky ghost. They set him free and he told them what to do to kill the evil ghost. After that night, nobody ever saw them again. Some people said that they were killed by the monster and some others that they continued their father's job: to kill as many evil creatures as they possible can. But, who really knows? 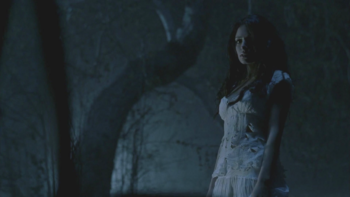 This article was posted in Halloween Stories. Bookmark the permalink. Follow comments with the RSS feed for this post.Both comments and trackbacks are closed.