Two friends, Mike and Jim were hanging out at Jim's house one day. Mike got up to use the bathroom. While he was gone, Jim heard a loud clash of breaking glass from inside the bathroom. He asked Mike what happened and heard his friend's voice reply, "I'm good".

When he left, Jim noticed something strange. The lettering on Mike's shirt appeared to written backwards. Thinking nothing of it, Jim walked to the the bathroom to see what caused the loud crash. When he opened the door, his blood froze, because lying on the floor was Mike's dead body, covered in blood and broken glass. 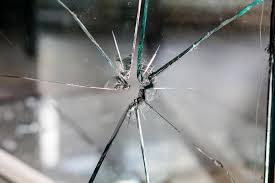