It was years ago, when I was 6 years old. My biggest fear was Slenderman.Slenderman is a big, creepy, tall man. He has extra hands and his face is covered with paper.He kills people and he makes people feel dizzy.I tried to find him on Google. I found really creepy pictures and here our story begins. My biggest fear started at that time. My friends weren't so scared, but me, I was really scared.

One night, I went to sleep but at 3 am, I woke up for no reason. I didn't know why.After 2 minutes, I heard some noises coming from the basement but I thought it was a cat. I tried to sleep again. In the morning,my dad went to the basement to get tools for work. I heard my dad screaming….d' Two hours later, I realised my dad hadn't gone to work. I went to the basement with my sister but we couldn't find him. We were really scared. Suddenly, a hand picked my sister up and she started screaming. The hand pulled her down a hole in the floor.I'd lost lost my sister! My mum was really scared,too. She wanted to go to the basement to find her but I didn't let her.I thought the hand will take her, too. 2 Months later, my dad came back to our house. He'd been injured really budly by Slenderman. Slenderman had a room to kill people, but my dad had made it out of there.We bought a camera to see what was going on down there an the next night, we set up the camera. Then, we went to sleep. In the morning, we saw slenderman getting out of the hole. He was really tall. He smashed the camera. The next morning, my mum and my dad weren't home. I tried to find them.but I couldn't so me and my friends and I went to find them.We found them in a house.It was this house where Slenderman was killing people.We went inside.The house had blood in bottles! We found my family in a locked room and we needed a key to unlock it but the key was in Slenderman's pocket. He was sleeping next to the door. We took it really carefully, and when we had unlocked it, we started running out of the house.At that moment, Slenderman woke up.My friends and I needed to find him or we would die. We started fighting him. We had knives but I also had my love for my family. I started to get really angry. My friends and I were like a team and we killed him, to save my family.

The next day, everything was ok. We'd done it! We'd killed him. So now, I will be honest, like never before.(of course,the story is fake.) 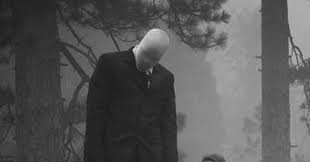